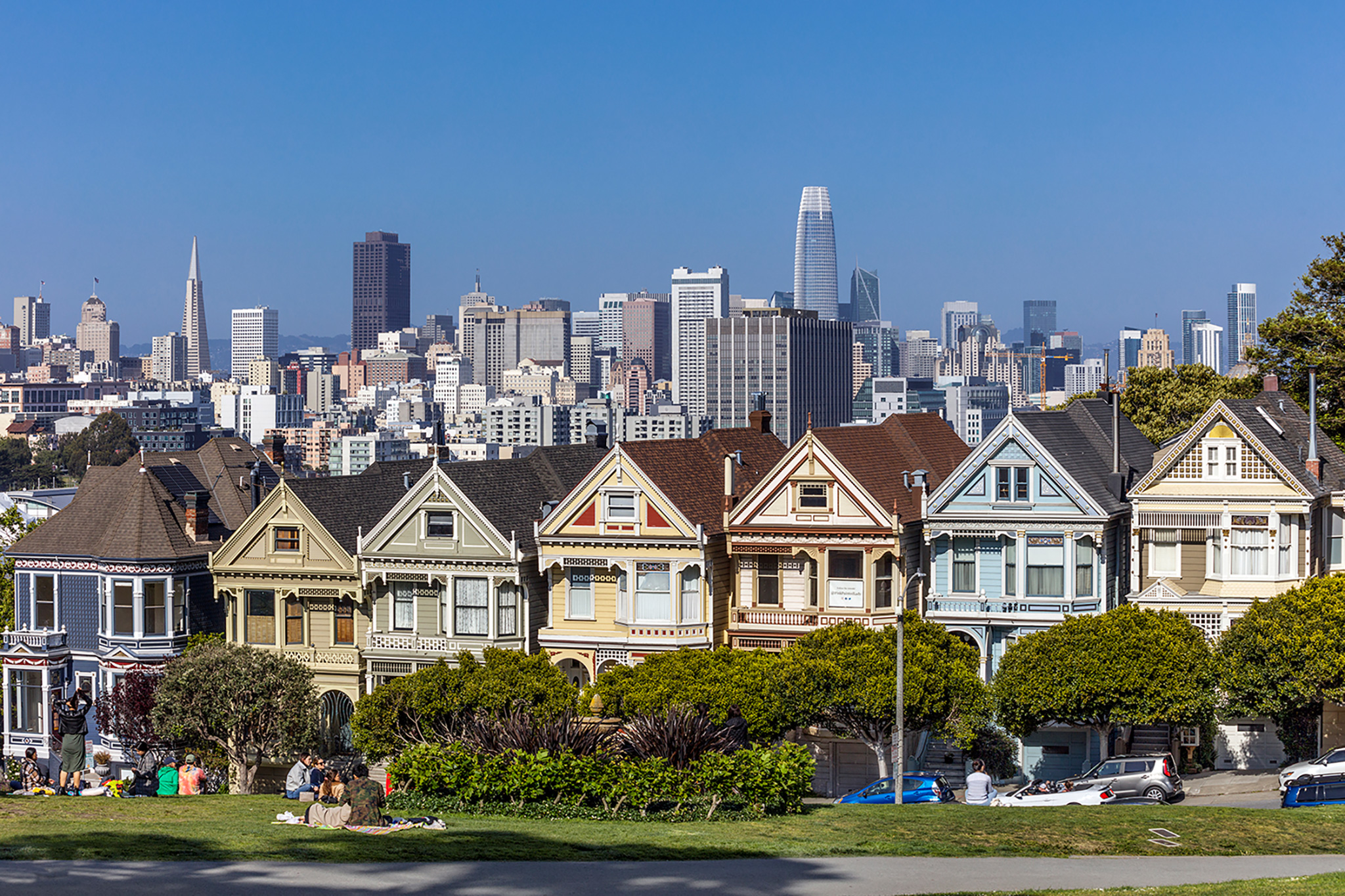 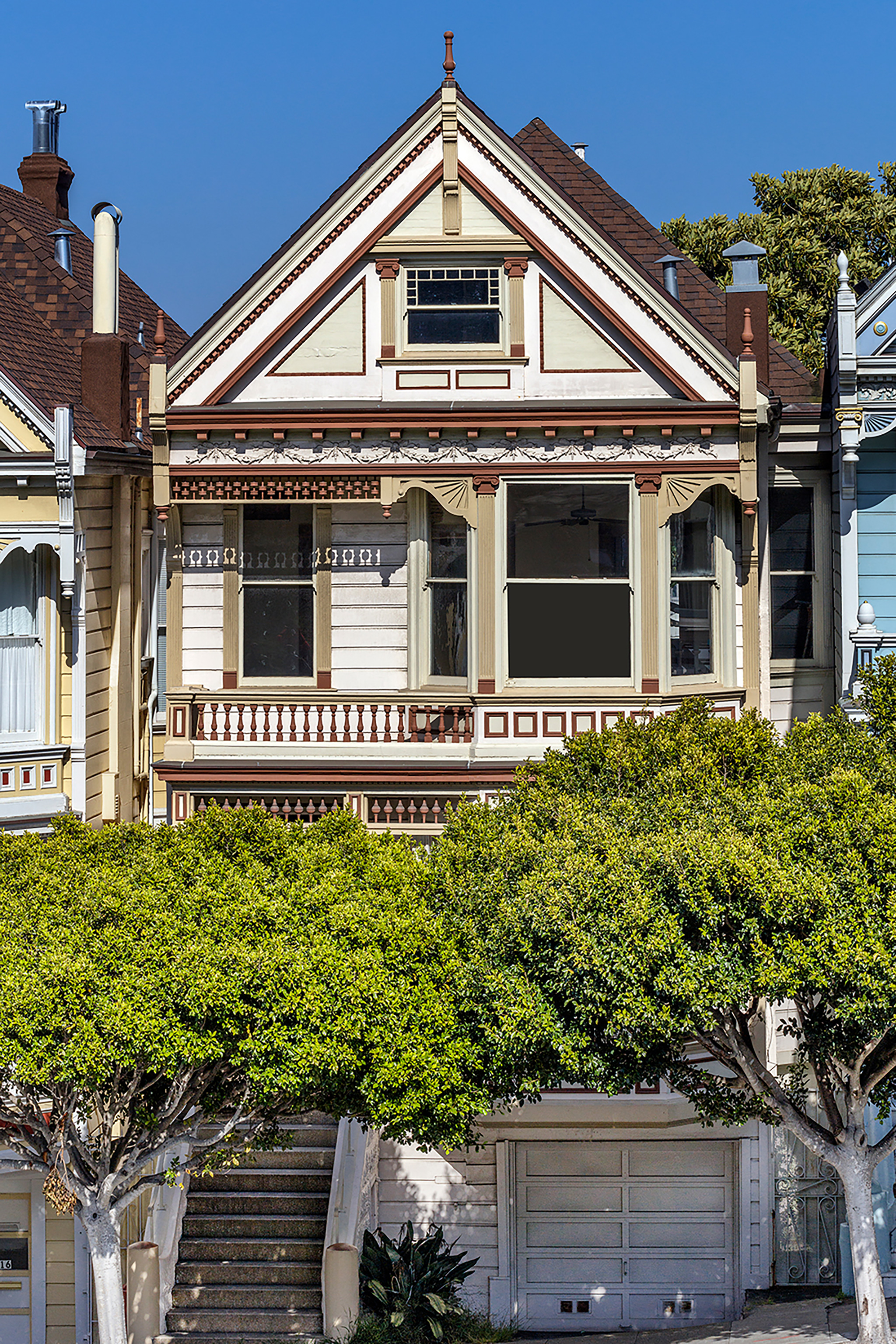 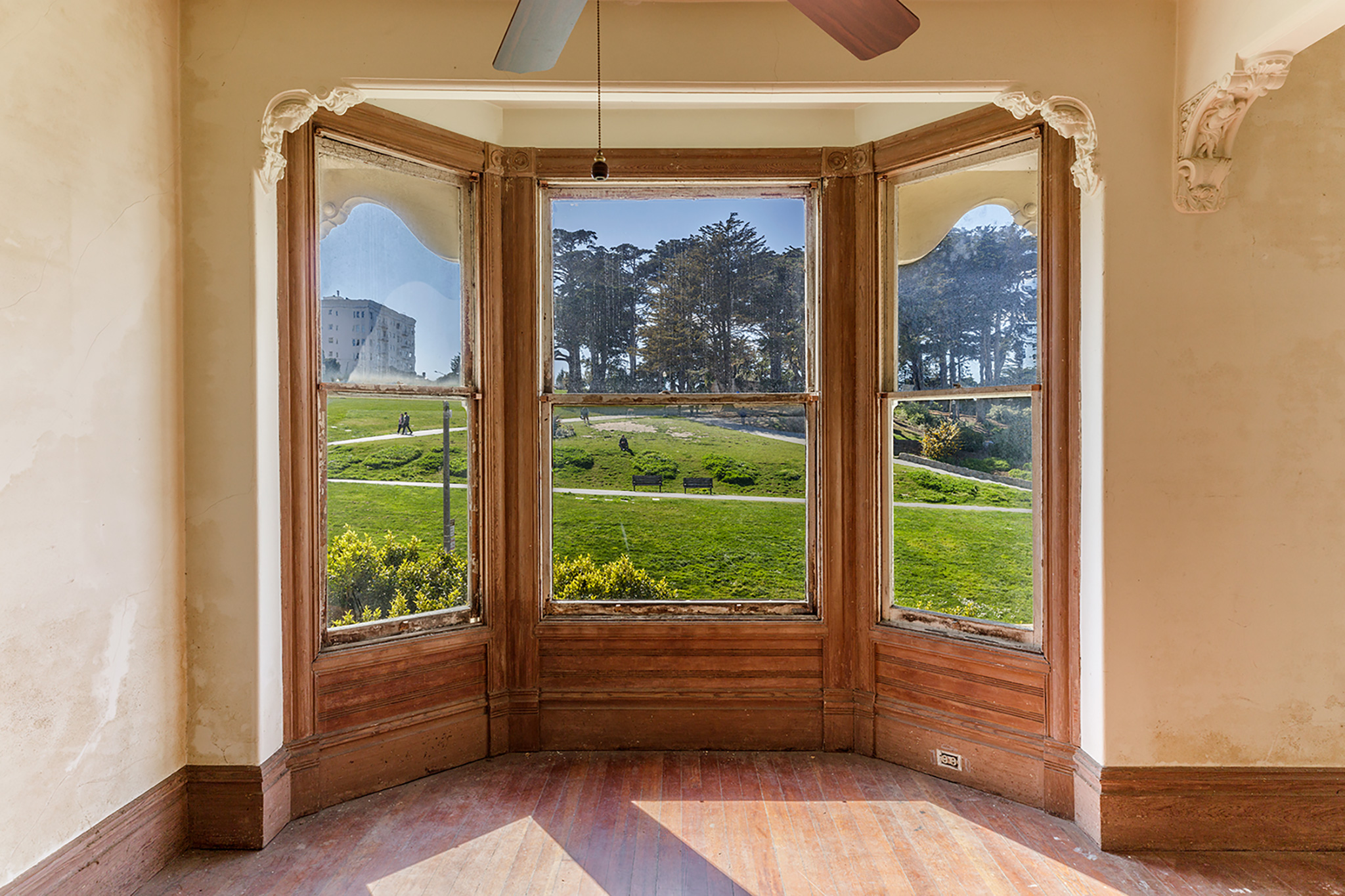 Once-in-a-lifetime opportunity to acquire an iconic Painted Lady on San Francisco’s celebrated Postcard Row! This 1890s Victorian, known as the Pink Painted Lady, is one of the Seven Sisters on the 700 block of Steiner. The home presents views of the green rolling hills of Alamo Square from oversized window bays at all three levels. From the kitchen at the back is a full view of the dome of City Hall, and on the second and third floors, there are striking views of the downtown skyline. Don’t miss this rare chance to own an incredible piece of San Francisco history and make it your own. 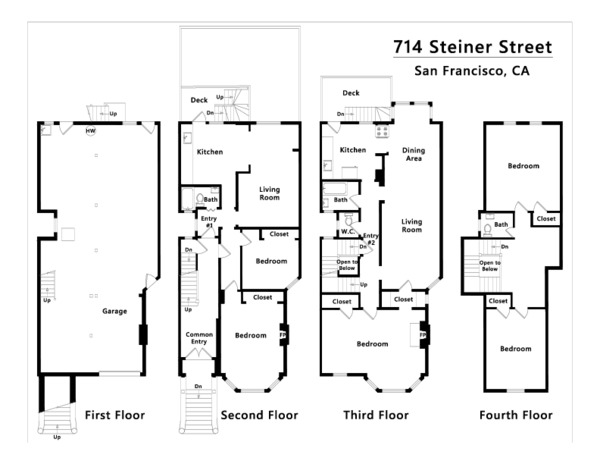 714 Steiner Street is part of a row of seven Queen Anne and Victorian-style homes known as the “Seven Sisters” or, more popularly, the “Painted Ladies” or “Postcard Row.” The building remains a significant contributor to the Alamo Square Historic District due to its high level of integrity relative to its period of significance (1892–1929). As one of the famed “Seven Sisters” designed and built by Matthew Kavanagh, 714 Steiner Street is an exceptional example of the Queen Anne style of architecture in San Francisco.

The area that is now Alamo Square Park and the surrounding neighborhood was originally part of the Western Addition of San Francisco. The name refers to the area between the original surveyed boundaries of the city, which ended between Larkin and Van Ness Streets, and Divisadero Street. The Van Ness Ordinance of 1855 cleared title to the land and extended the established, standard grid pattern of streets, and set aside a number of parks and squares. The following year, the city set aside land for a public park bound by Hayes, Steiner, Folsom, and Scott Streets, naming it Alamo Square. The 12.7-acre park located at the center of the Alamo Square Landmark District is the district’s primary landscape feature.

Extensive settlement of this area of San Francisco began in earnest around 1869. Due to the views, weather, and accessibility from the newly constructed McAllister and Hayes Streets cable cars, more residents began to move westward. Many of these newcomers were professionals who had commissioned architects and well-known builders to design single-family residences.

The area was spared from destruction in the 1906 earthquake and fires, as it was just outside of the extensive “burned district.” Photographs taken the day after the earthquake from Alamo Square show the row of houses on Steiner Street in the background as San Franciscans were fleeing the fire consuming downtown. By the 1920s through World War II, many of the residents of Alamo Square were German-Americans, Italians, and many Jewish families.

During and after World War II, the area was occupied by an increasing African-American population, who had relocated to California to take advantage of war-time job opportunities and then remained. In the 1960s and 1970s, some of the neighborhood's African-American population was displaced by the redevelopment of the Fillmore district, relocating again to the Ocean View-Merced Heights-Ingleside neighborhoods.

In the late 1970s and early 1980s, young professionals, some of whom were gay men, began to move into the houses surrounding Alamo Square, attracted to the large homes with their historic ornamentation still intact. A renewed awareness in the neighborhood, the park, and the surrounding historic homes forged an increased interest in historic preservation. In 1984, the city, in part spurred by the work of the Alamo Square Neighborhood Association, designated Alamo Square, through Article 10 of the Planning Code, as a San Francisco Historic District.

The Alamo Square Historic District is significant as a continuum of distinguished residential architecture by distinguished architects spanning the period from the 1870s to the 1920s. The towered Westerfeld House (1198 Fulton Street), the renowned “Postcard Row” with its background of the downtown skyline, and the neighboring streetscapes are as identified worldwide with San Francisco as the cable cars and Coit Tower. With a variety of architectural styles, the District is unified in its residential character, relatively small scale, construction type, materials (principally wood), intense ornamentation (especially at entry and cornice), and use of basements and retaining walls to adjust for hillside sites. Boundaries include the park, its edges, the nearby buildings rated highest on the city’s architectural survey, and infill structures for rational planning. With a high degree of integrity to its original designs, the District clearly serves as a visual reminder of how businessmen lived two to four generations ago.

Matthew Kavanagh (Kavanaugh) was born in County Wexford, Ireland in 1845. He immigrated to the United States in 1869. During the 1870s and 1880s, he worked as a coachman and later became an agent and collector for Joseph Emric (Emeric), a wealthy realtor from France. Kavanagh went on to become an independent real estate developer and builder in the 1890s.

Kavanagh was the Vice President of the Alamo Square Improvement Club, a club formed by property owners of Alamo Square in 1892. He advocated for urgent attention to crime around the Square. Kavanagh himself resided at 722 Steiner Street after its construction in 1895, but he only lived there for five years before moving to San Rafael with his wife Catherine. Kavanagh also built two houses in the 800 block of Steiner Street, 896-896 Steiner (the Mertens Flats) and 812-814 Steiner.

The Kavanaghs donated a stained-glass window to Sacred Heart Catholic Church on Fillmore Street. The window incorporates the likenesses of their patron saints, Catherine of Alexandria and Matthew the Apostle. Kavanagh was an active member and advocate within the Irish American community in San Francisco. He died on January 6, 1911 at the age of 66.

714 Steiner Street is located on the east side of Steiner Street between Hayes and Grove Streets across from Alamo Square Park. It is within the boundaries of the Alamo Square historic district. The house sits on a lot measuring 23 x 75 feet. There is a curb cut to accommodate a later first-story garage. It was originally built as a single-family home, but was converted into two dwelling units in the late 1940s.

The house is a two-story-over-garage wood-frame, Queen Anne-style residential structure. The Steiner Street façade is the contributing element to the Alamo Square Historic District. At the lower story, there is a garage opening and a modern metal pedestrian access gate. The front stairs, which are not likely original, consist of terrazzo treads and risers, textured stucco side walls and a wooden balustrade. The front entry had paneled side walls and a wood and glazed double front door. There is a prominent angled bay window at the first and second story. The bay overhangs the garage entry. Above the entry, there is a flat roof with a wooden balustrade. A double-hung window and one of the bay windows overlook this feature. The house is capped with a gable roof with the front-facing gable having a decorative attic window. The gable has a decorative cornice with swags and dentils. There are finials at the gable ends and at the apex. The house has many of the same features as its immediate neighbors, which were all designed and built by the same Victorian-era builder.

The interior of this house was divided into two units in 1960. It has been significantly changed over time and much of the interior finishes are in disrepair.

The house at 714 Steiner Street was built in 1894 by builder Matthew Kavanagh. By 1900, William N. Hannigan owned the property and resided in the house with his wife Emily, a young son Thomas, and a servant identified as Hannah M. English, according to the census. William N. Hannigan was a native of Ireland who immigrated to the United States in 1890. He worked as a Steward-Steamer. By 1910, Herbert M. Greene began renting the house; he worked as a clerk in the stoves and metal industry. According to the 1920 census, Green lived in the house with his wife of 28 years, Jennie, a daughter Marie, and sons William and Raymond. They also had a roomer named William Mullins, who was a salesman of dry goods.

By 1920, the house was owned by Agnes Downs, a 58-year-old widow. Living with Ms. Downs were her brother-in-law William, who worked as a nightman for the American Red Cross, roomer Helena Anican, a French clerk, lodger C. H. Schultheis, a Swiss widower and merchant, and lodger John Tullock, a Scottish carpenter. A young couple named Elmo and Mabel Lake also lived in the house as roomers. Elmo was a oil machinist, while Mabel worked as a bookkeeper at a grocery store. Ms. Downs continued to own and occupy 714 Steiner over the next two decades. According to the census, her home was valued at $10,000 by 1930. In that year, it was recorded that Ms. Downs had only one roomer named Frances Hiddie, who was a supervisor in the telephone industry. The value of her home was identified as $4,000 in 1940. By then, Ms. Downs had several lodgers again: Edwin J. Hermany; Adam Cneesh, who was from Lithuania and worked as a presser; and Frank Ledwith, who was a general laborer from Spokane, Washington. Ms. Downs died in 1948.

After 1948, the property appears to have been owned by G. L. Berton for a short time. By 1955, James Molemore owned the property. The house was identified as vacant in 1960, and was converted from a single-family dwelling to two residential units around that time. By 1965, the house was occupied by Mrs, Evelyn A. Bowens who worked as a clerk, and the rear of the house was occupied by Georgia L. Williams. Neither woman appears to have owned the house. Between 1970 and 1982, 714A was rented by Mrs. Sarah A. Lum, who worked as a United States government employee. During these years, 714B was occupied by various renters. According to the city directories, John R. P. Saint lived in the unit in 1970; Gary Scanlan lived there by 1975; and Dwight Lum, an employee of Harry Young Furniture, lived in the house between 1980 and 1982.

last step to your dream home

∎
Thanks for contacting us! 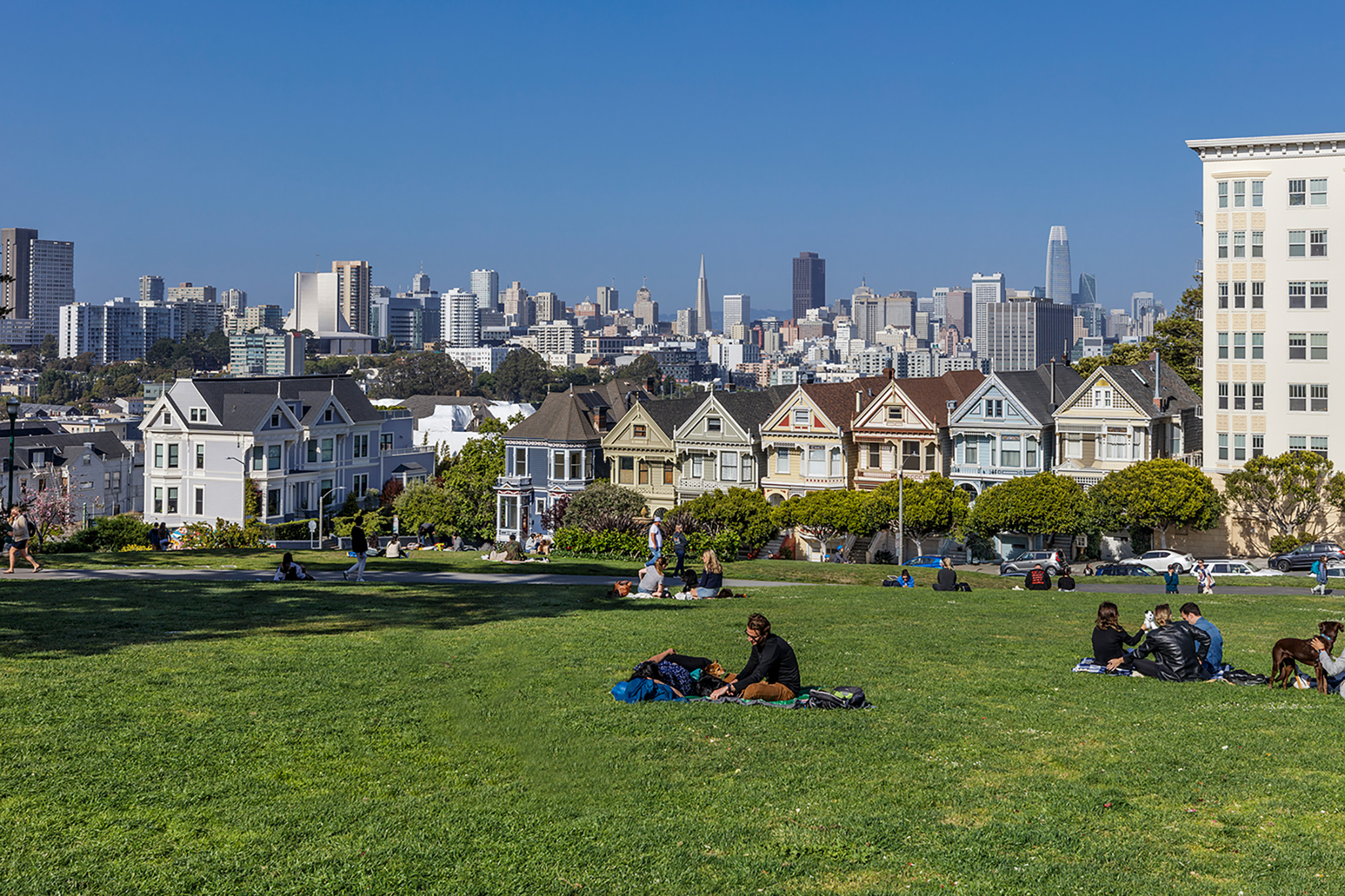 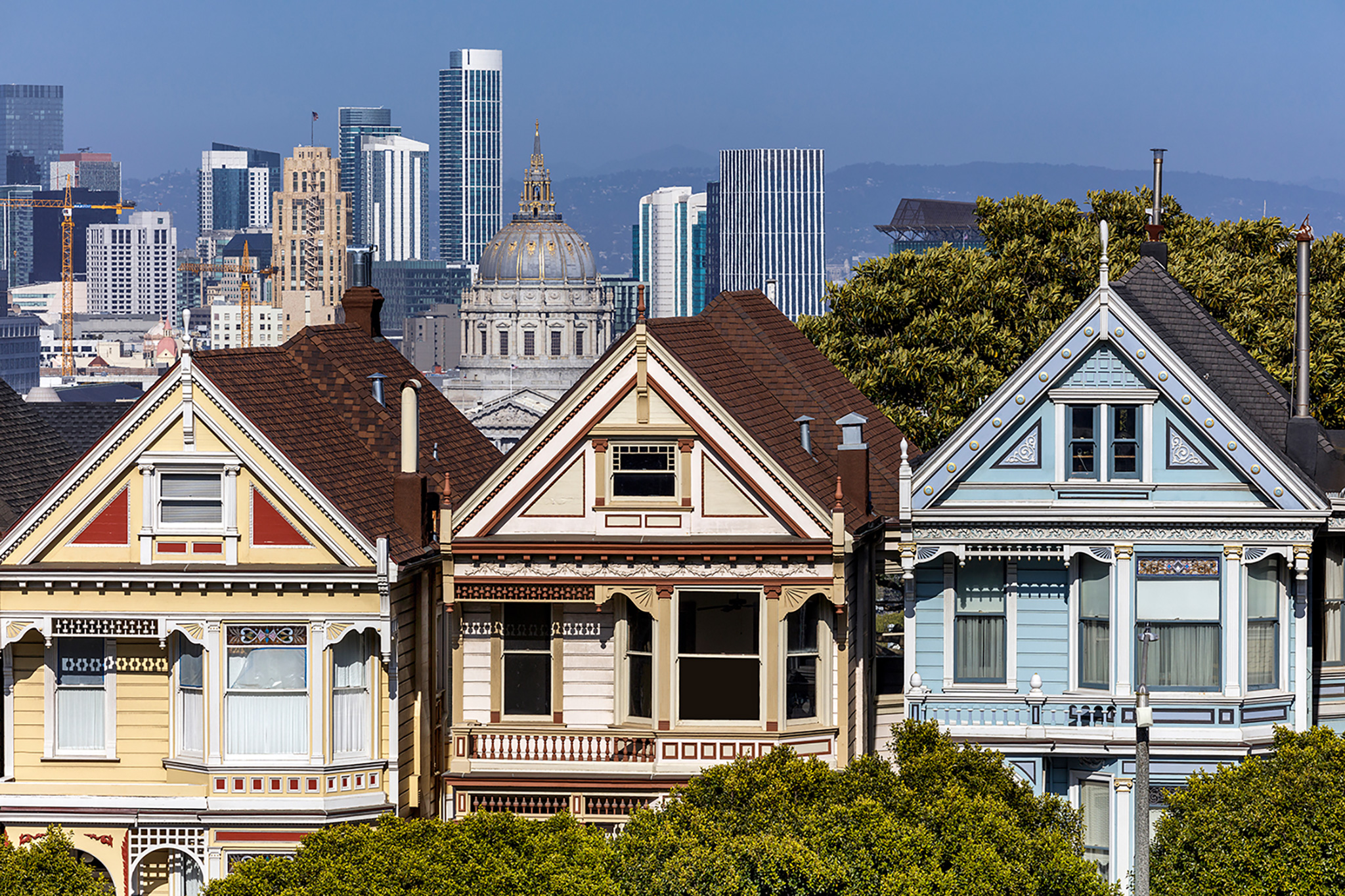 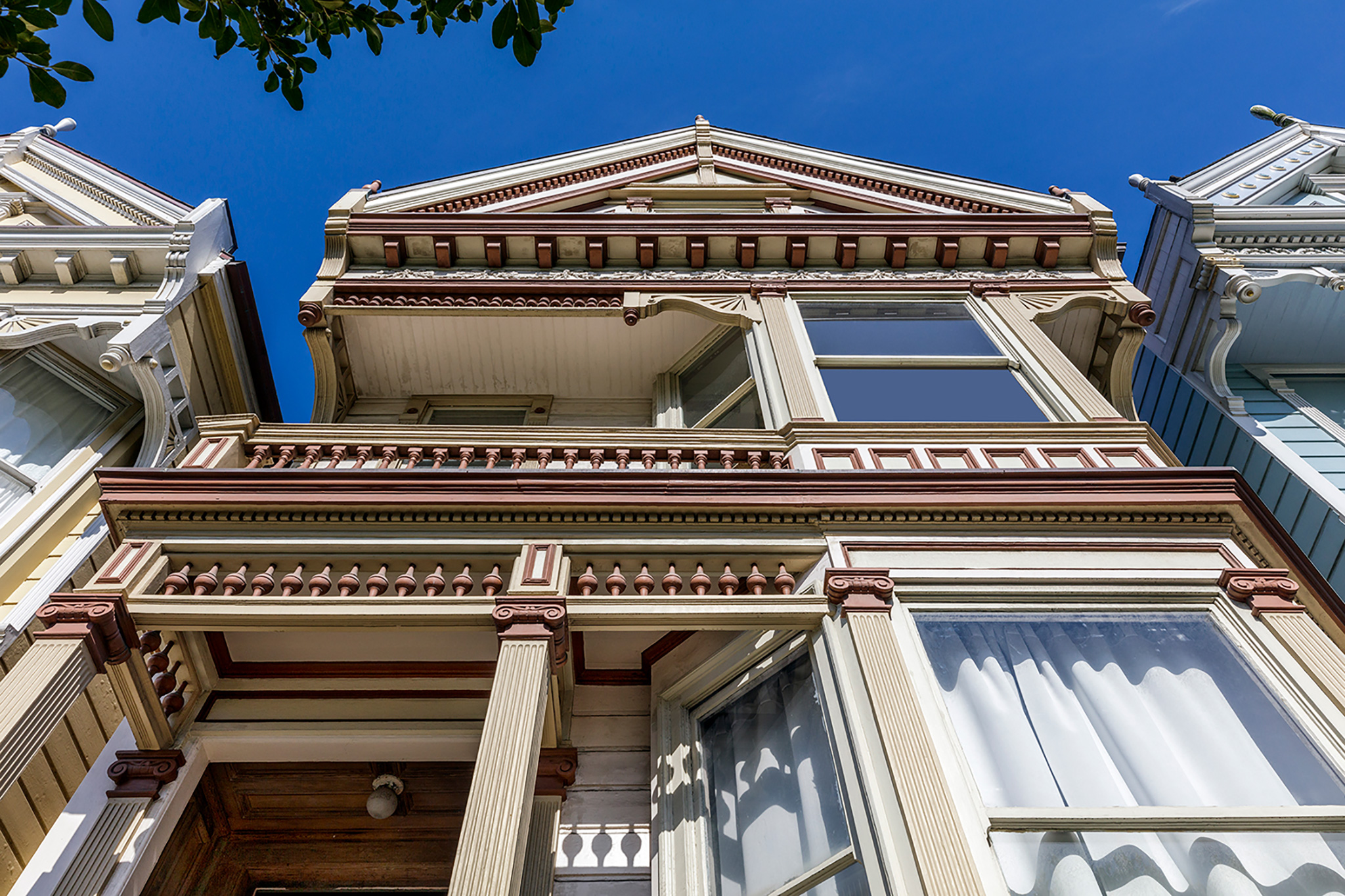 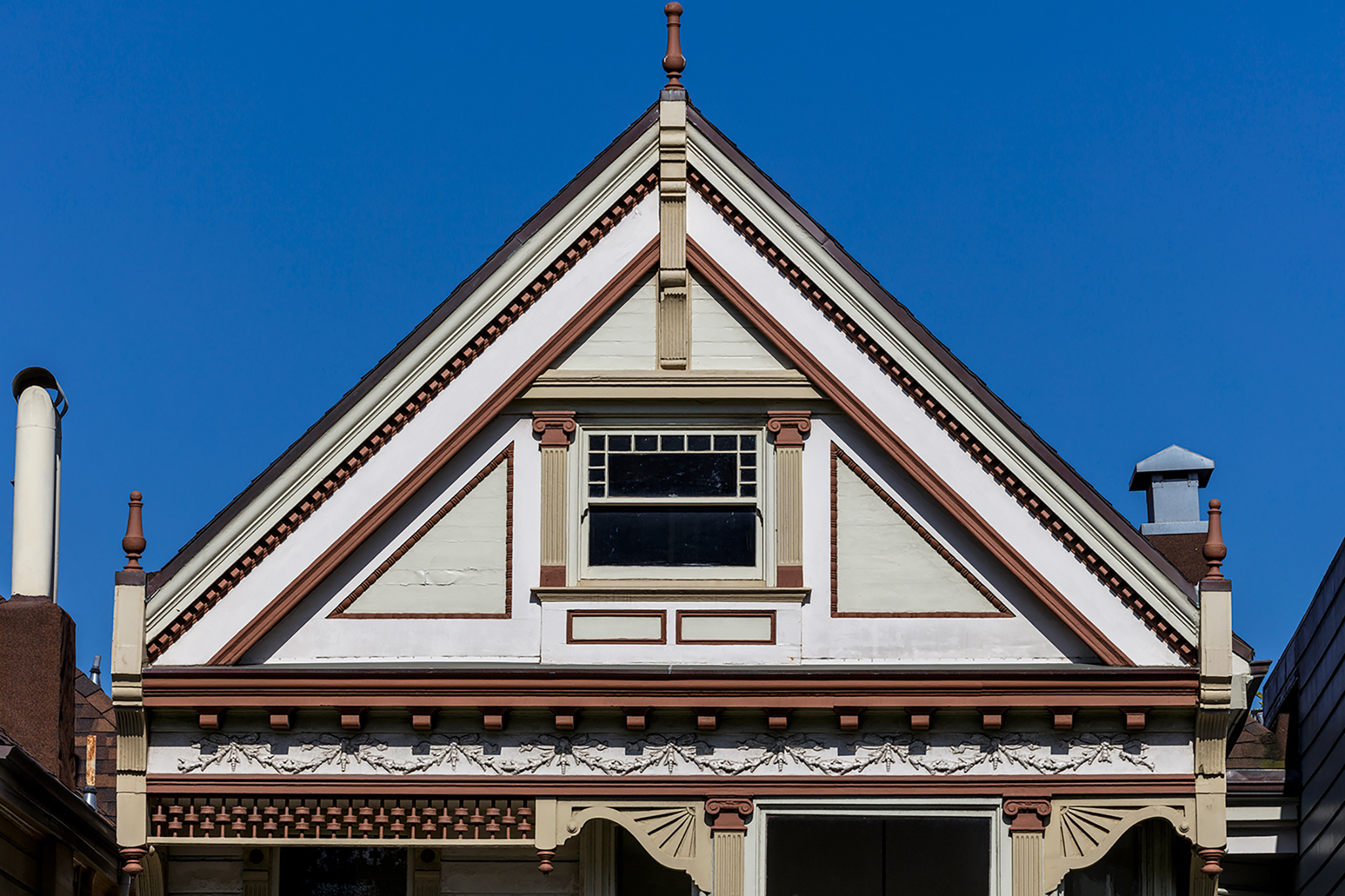 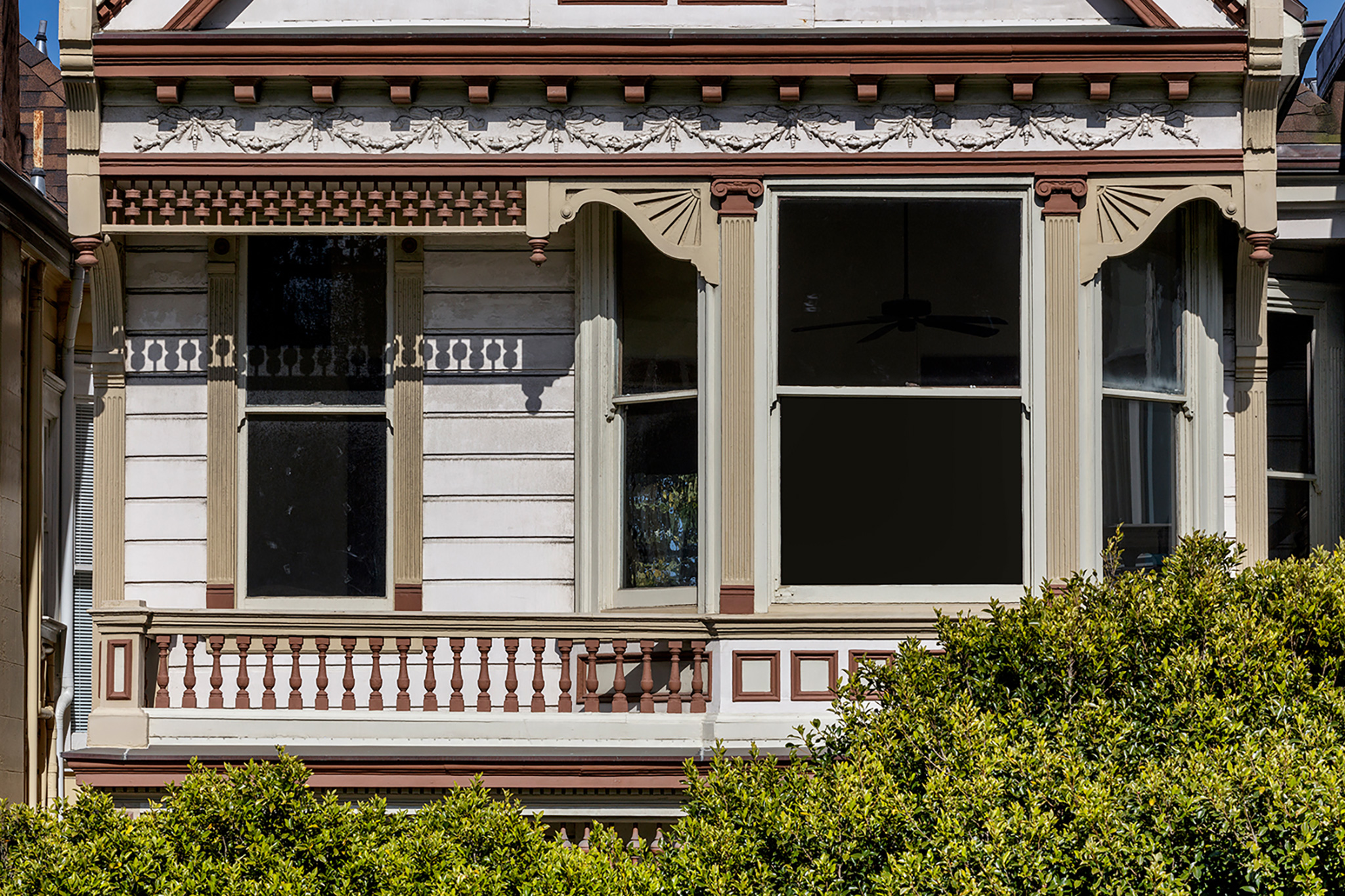 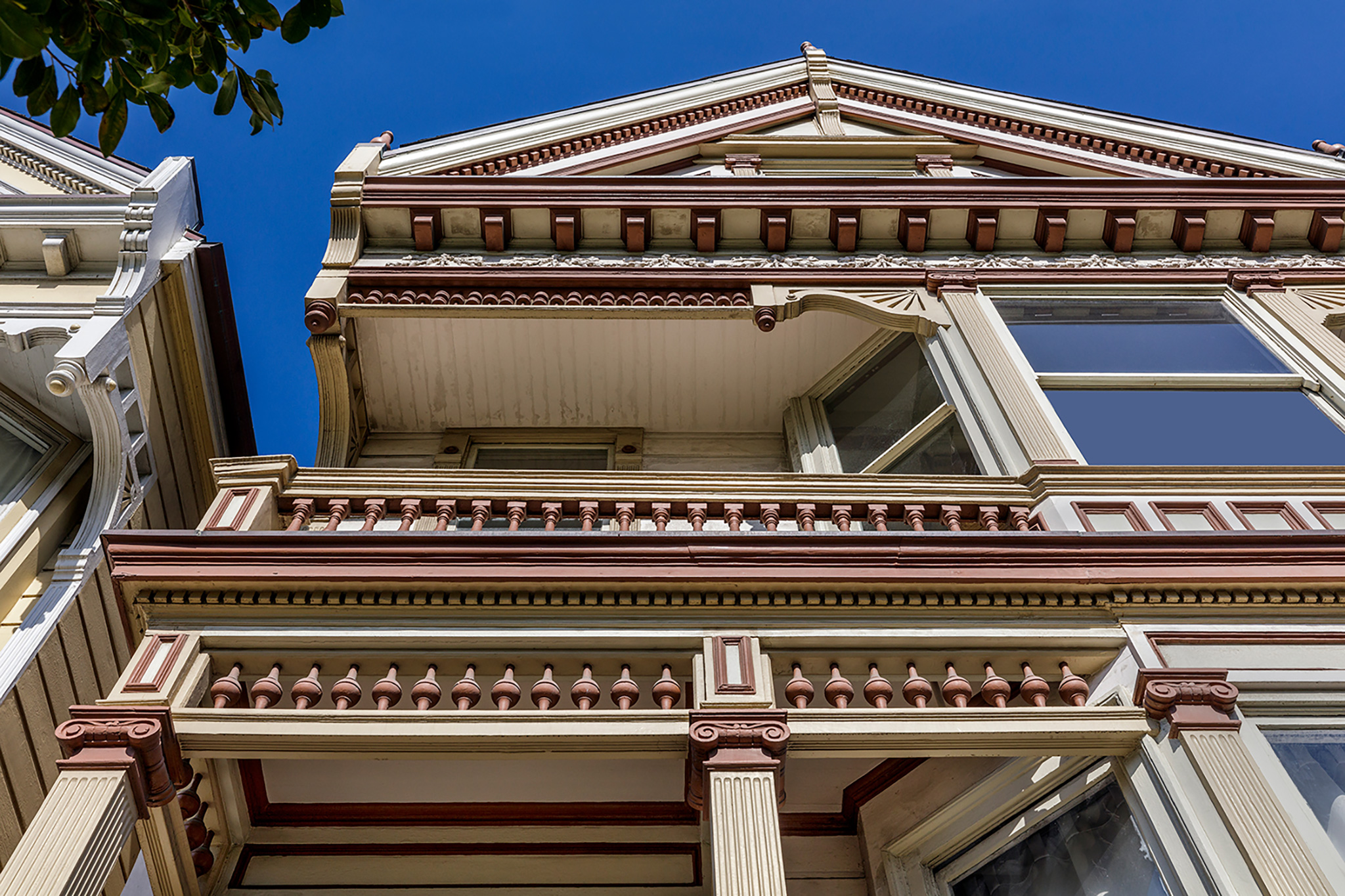 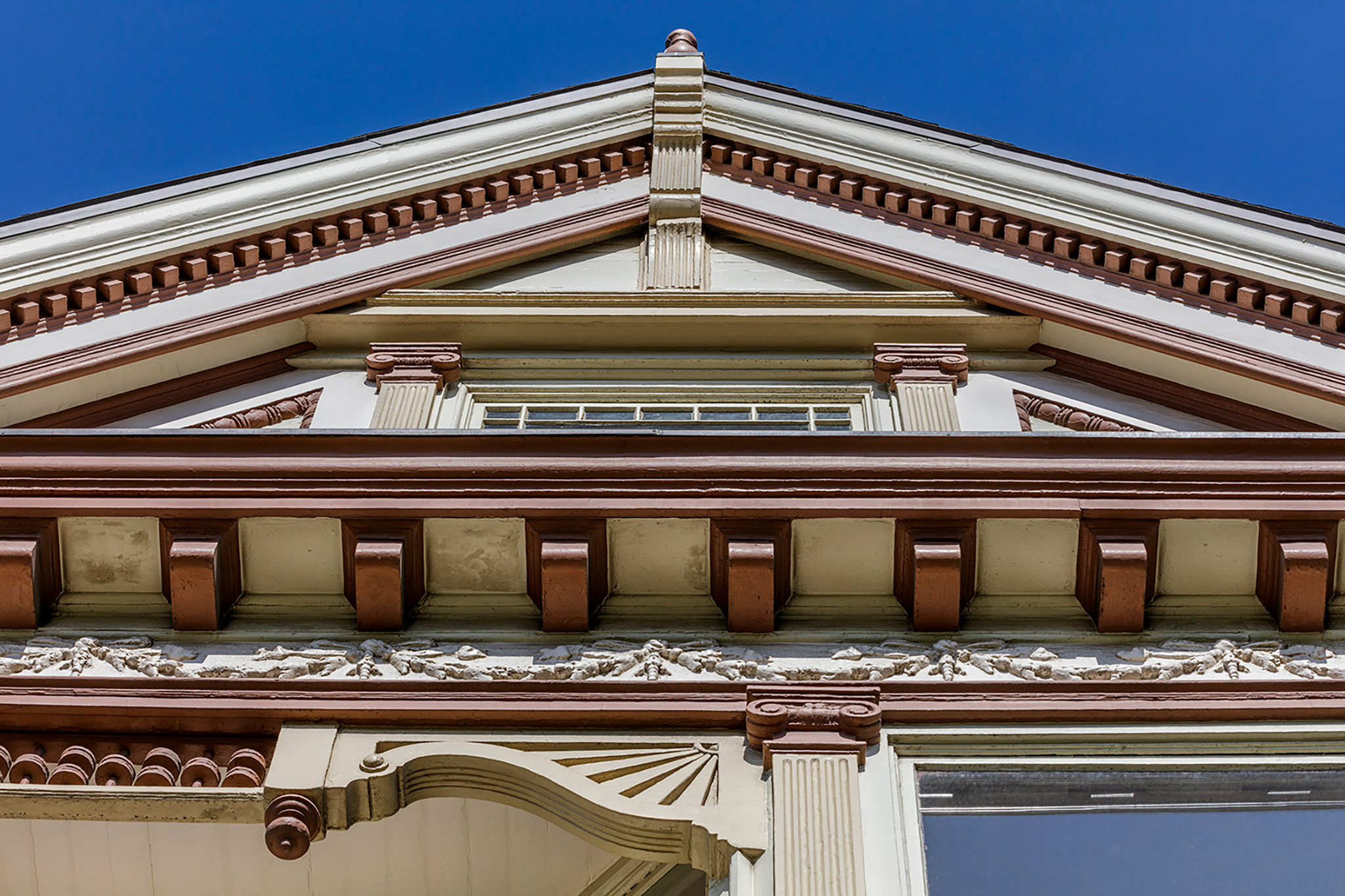 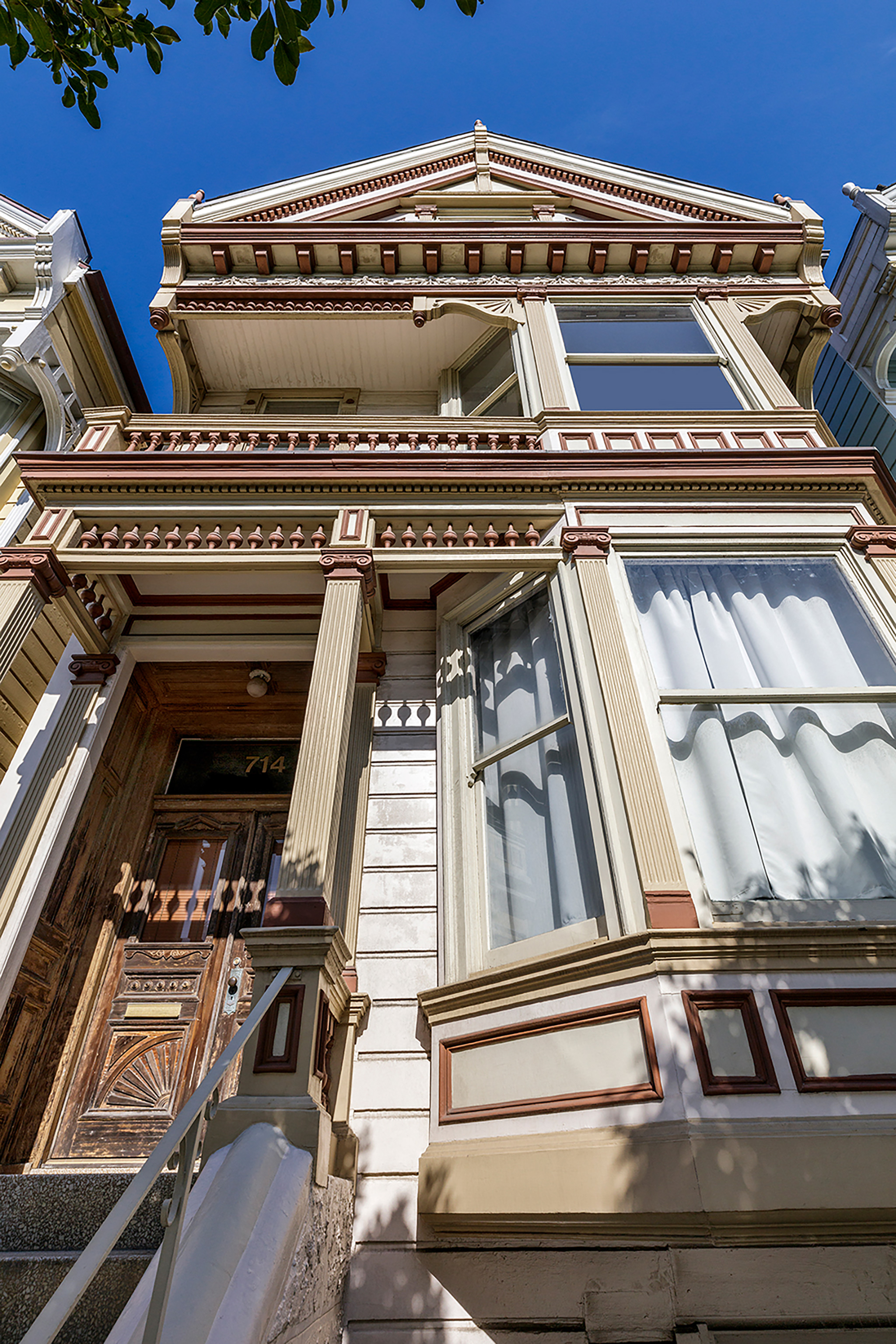 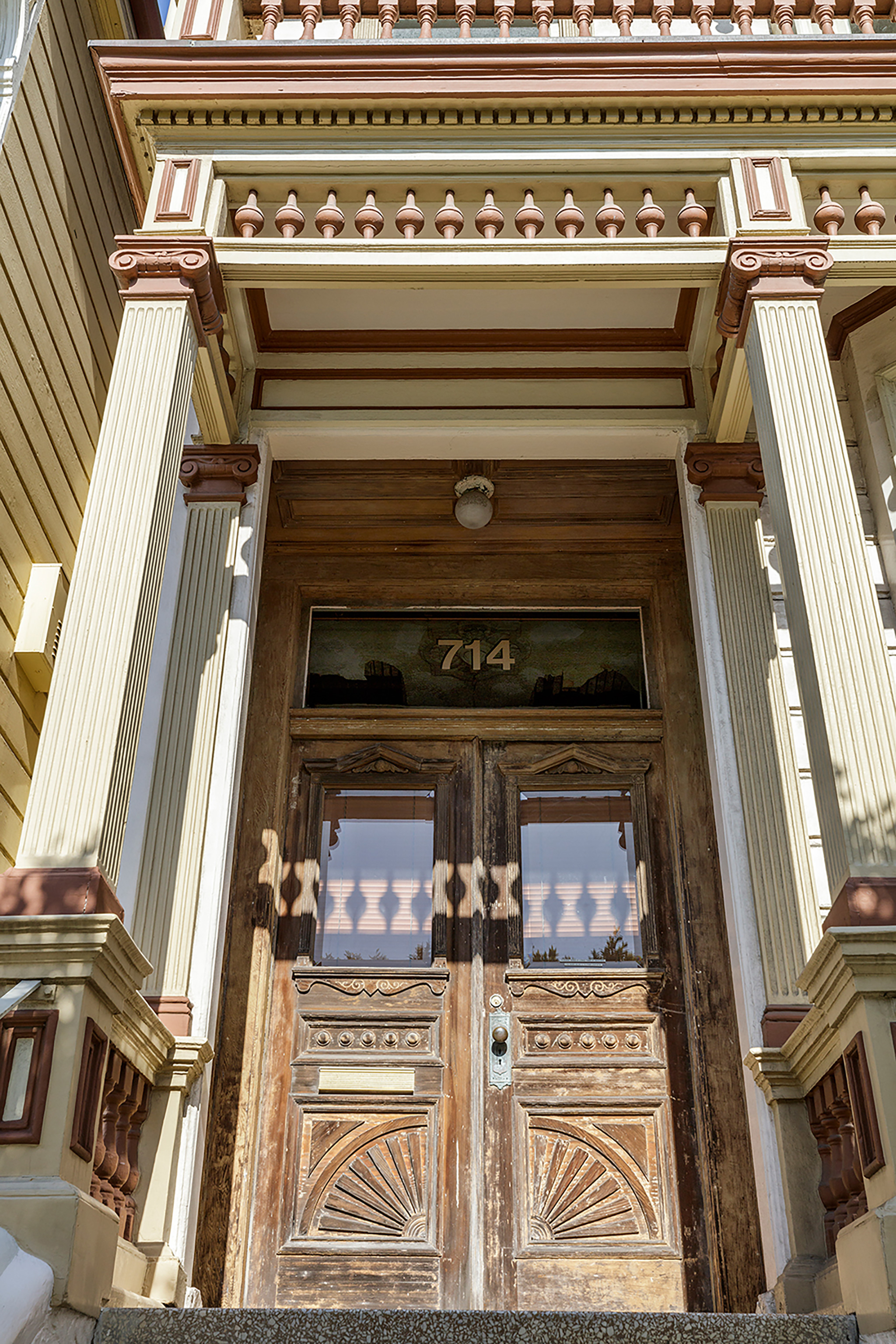 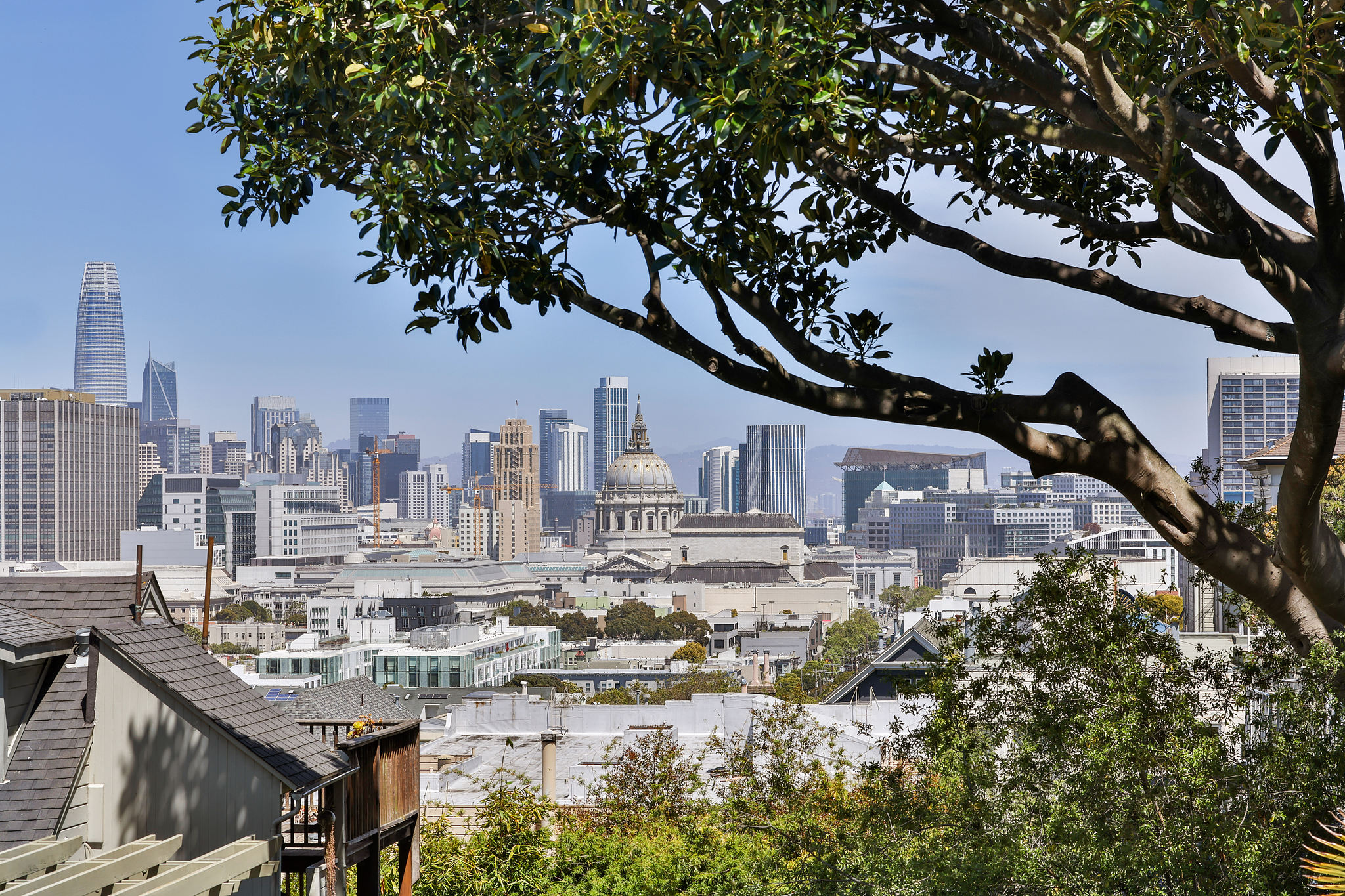 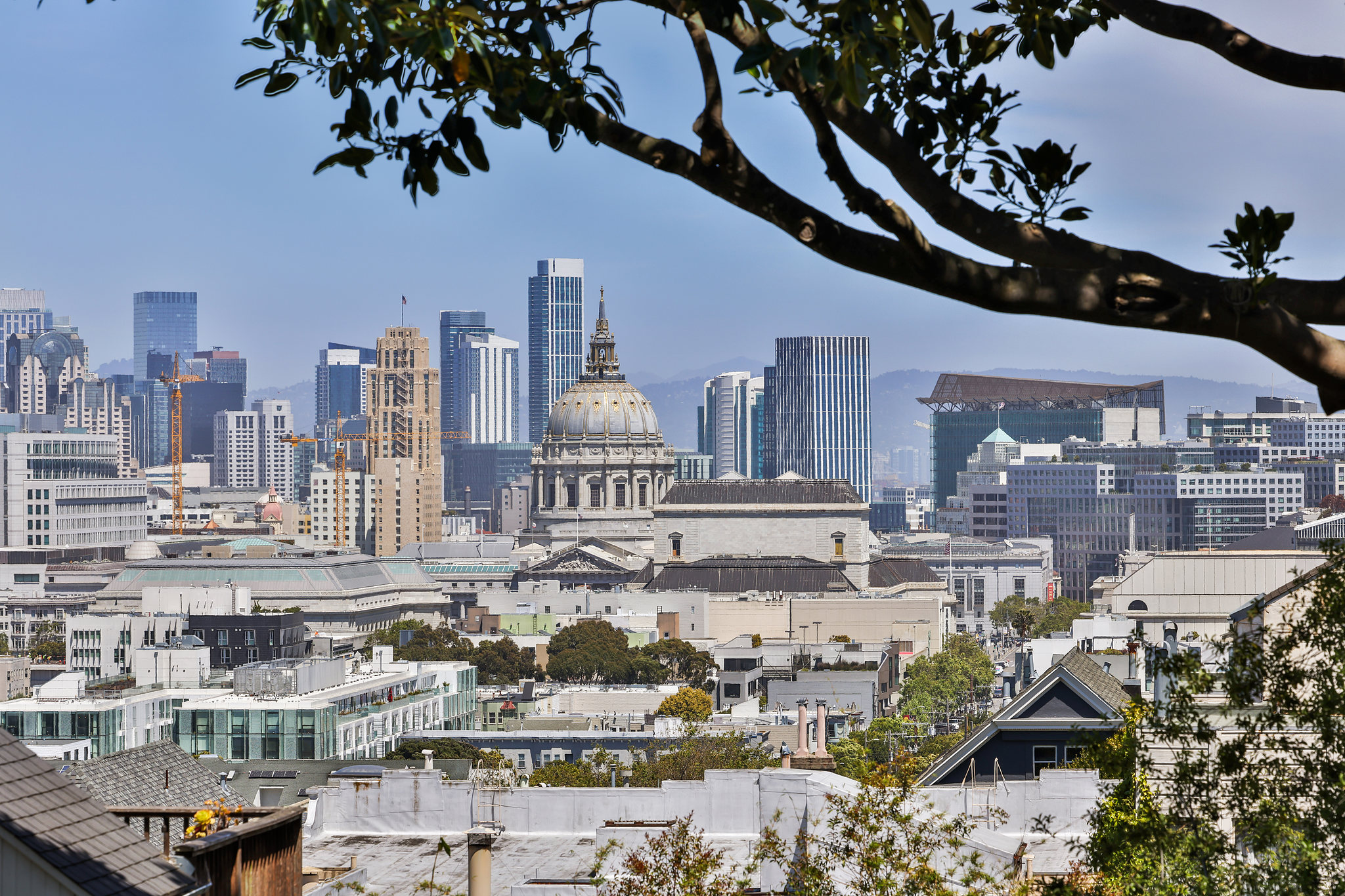 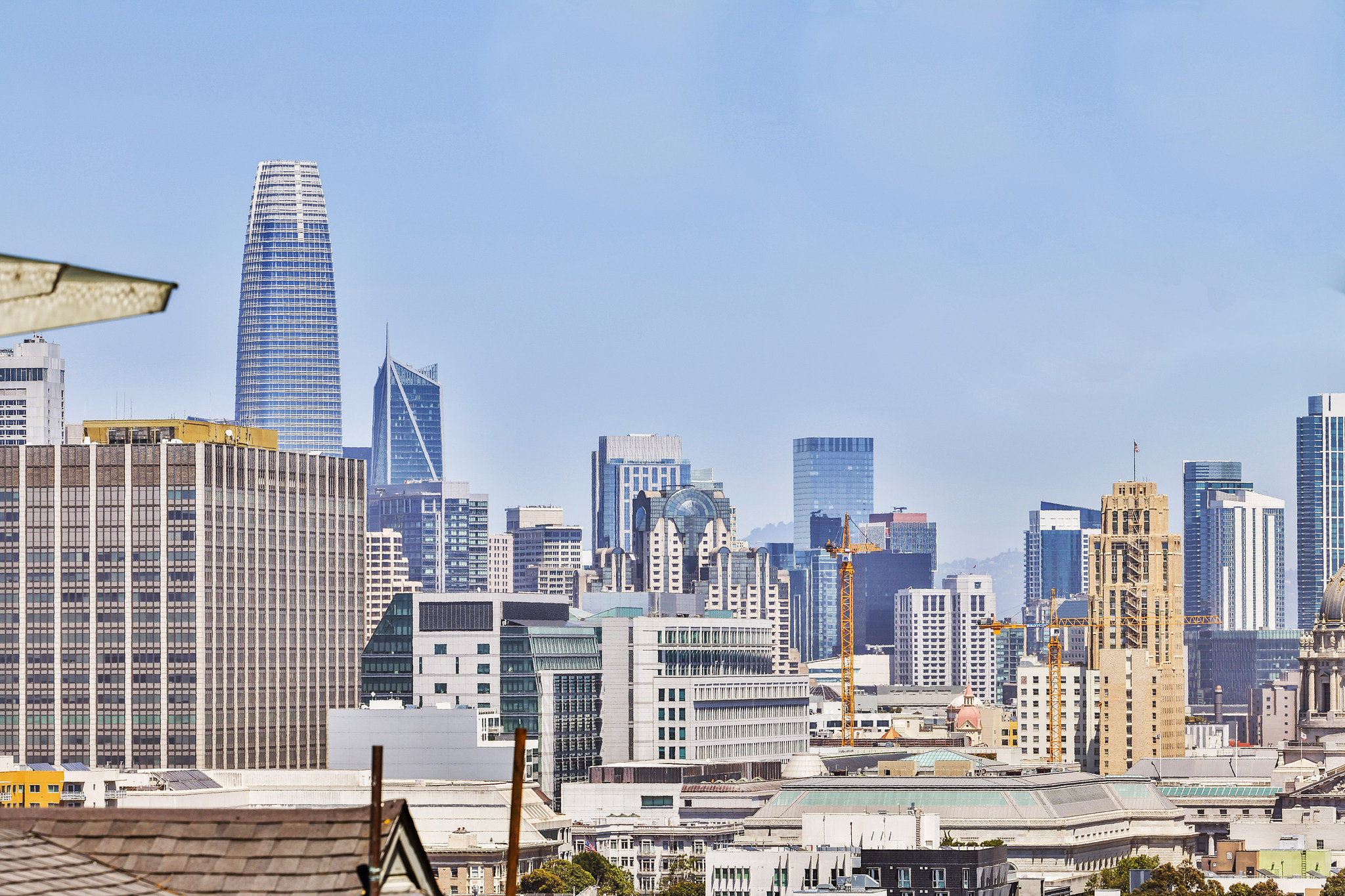 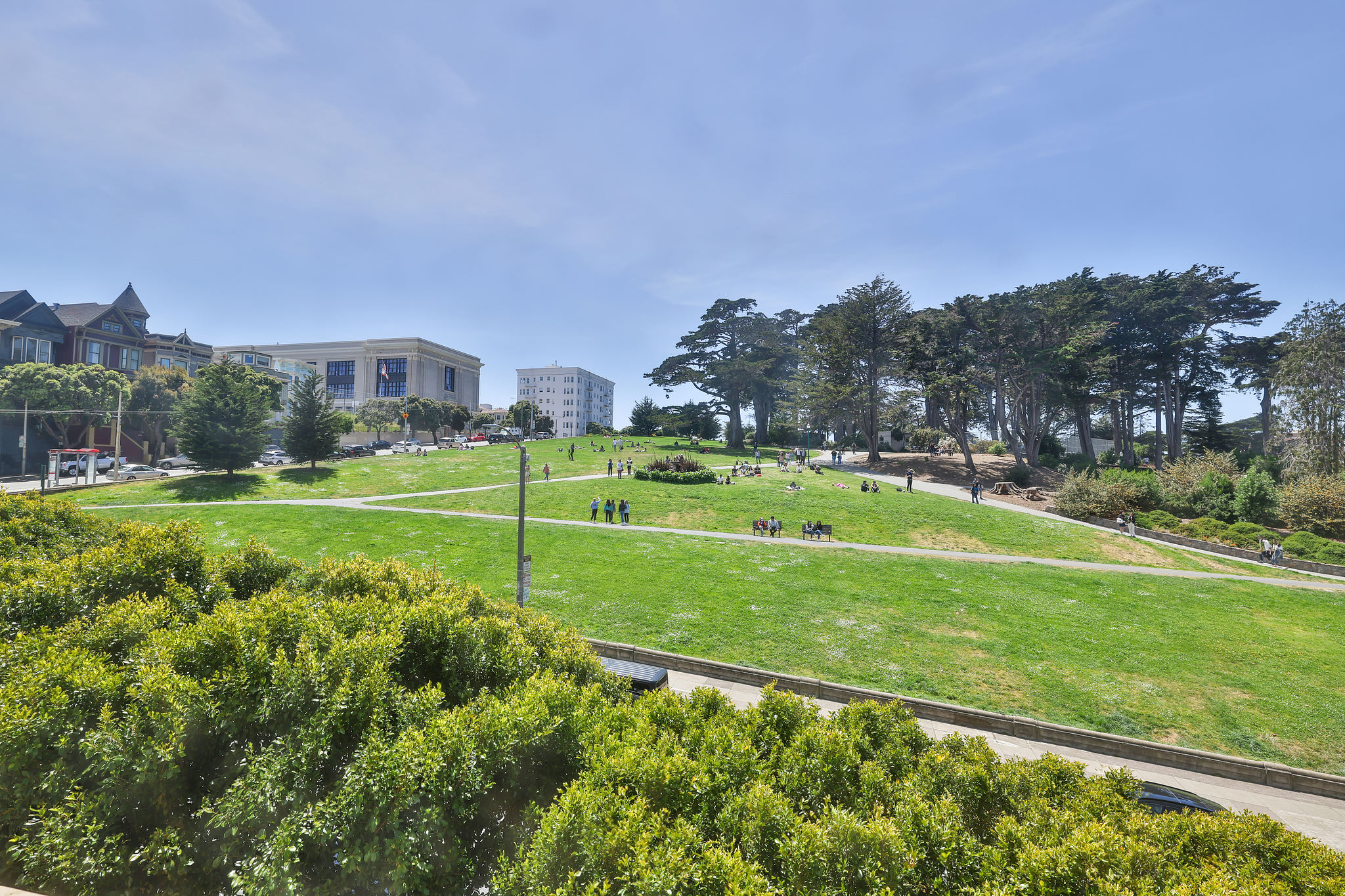 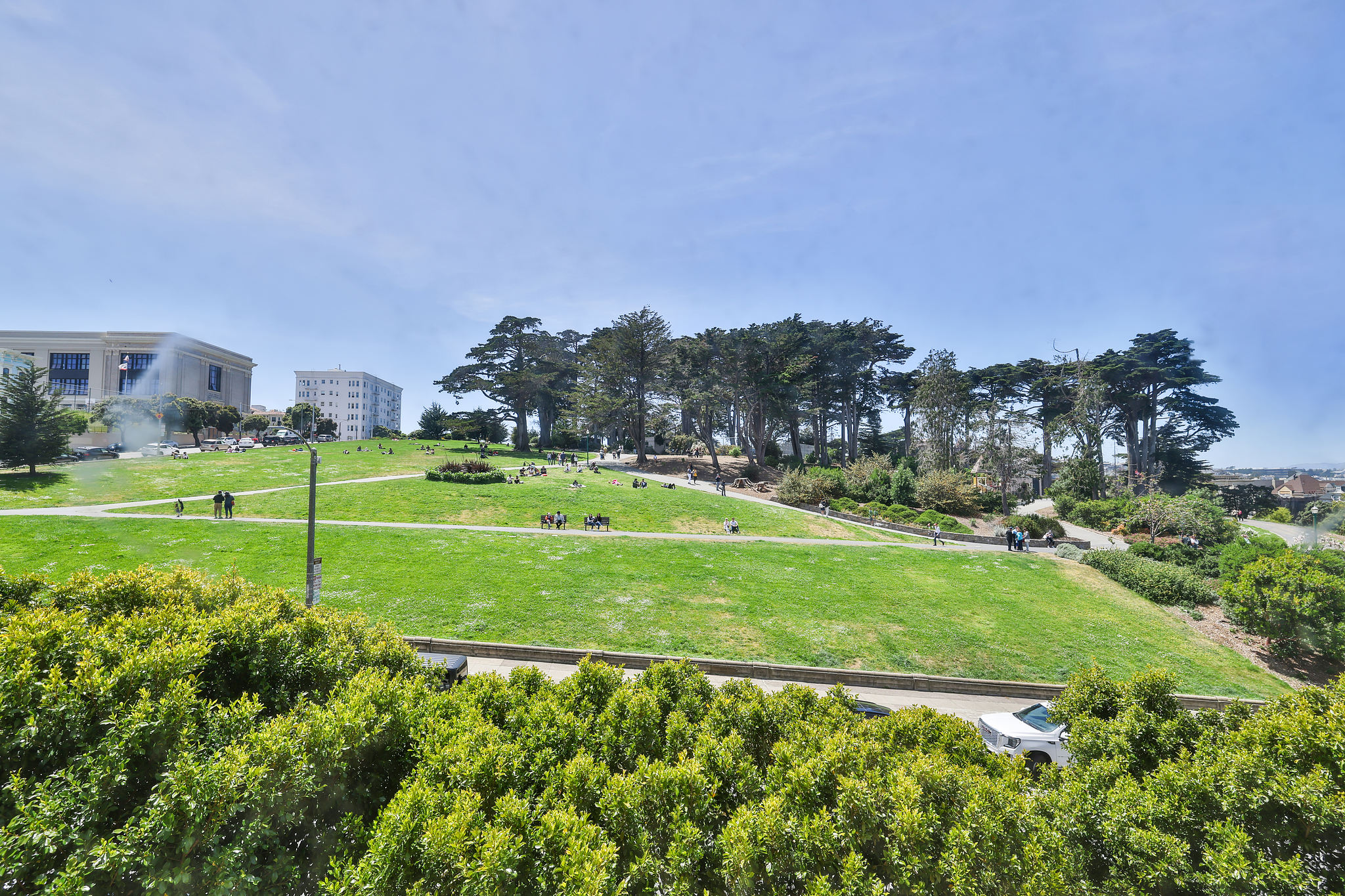 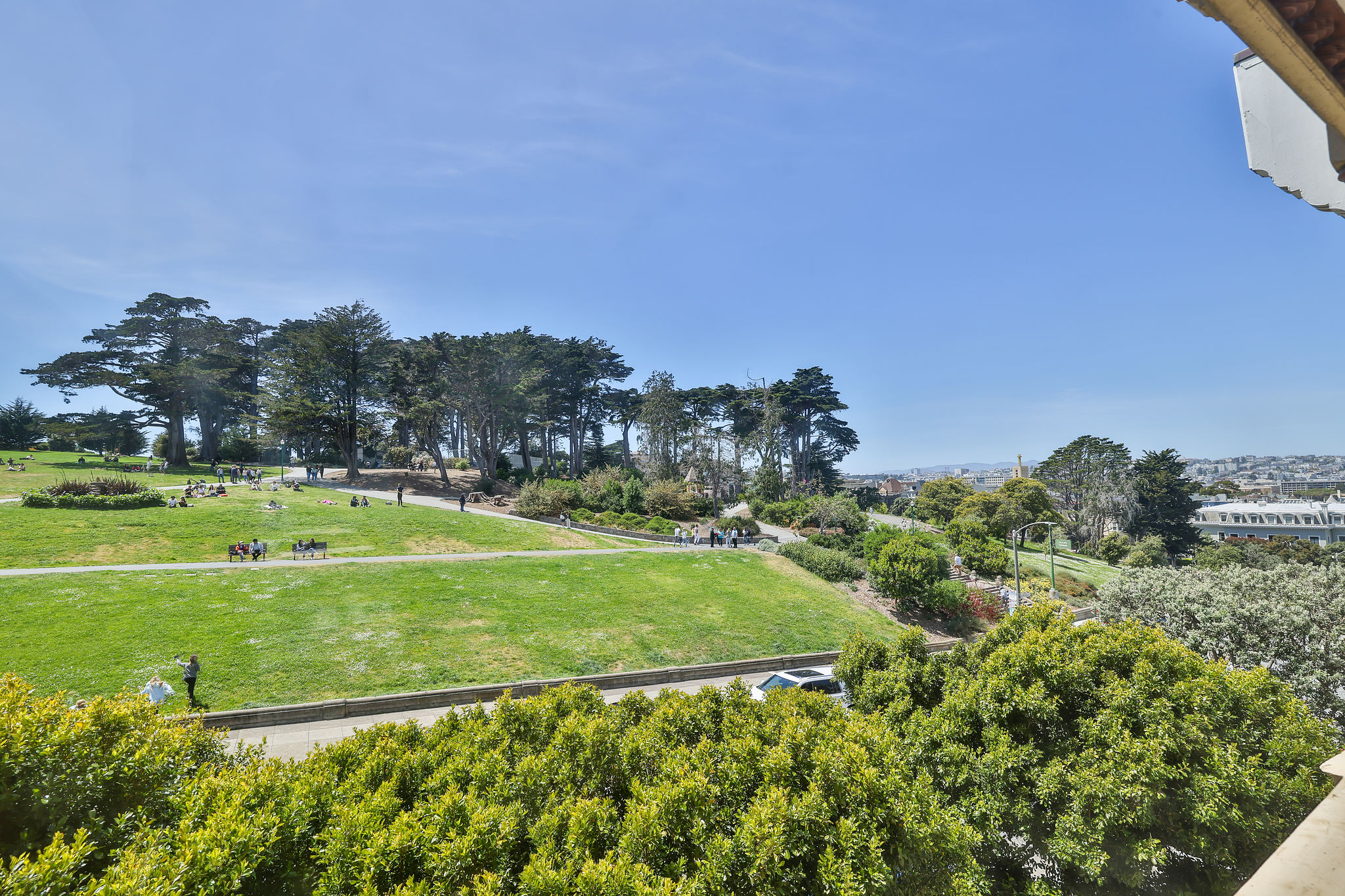 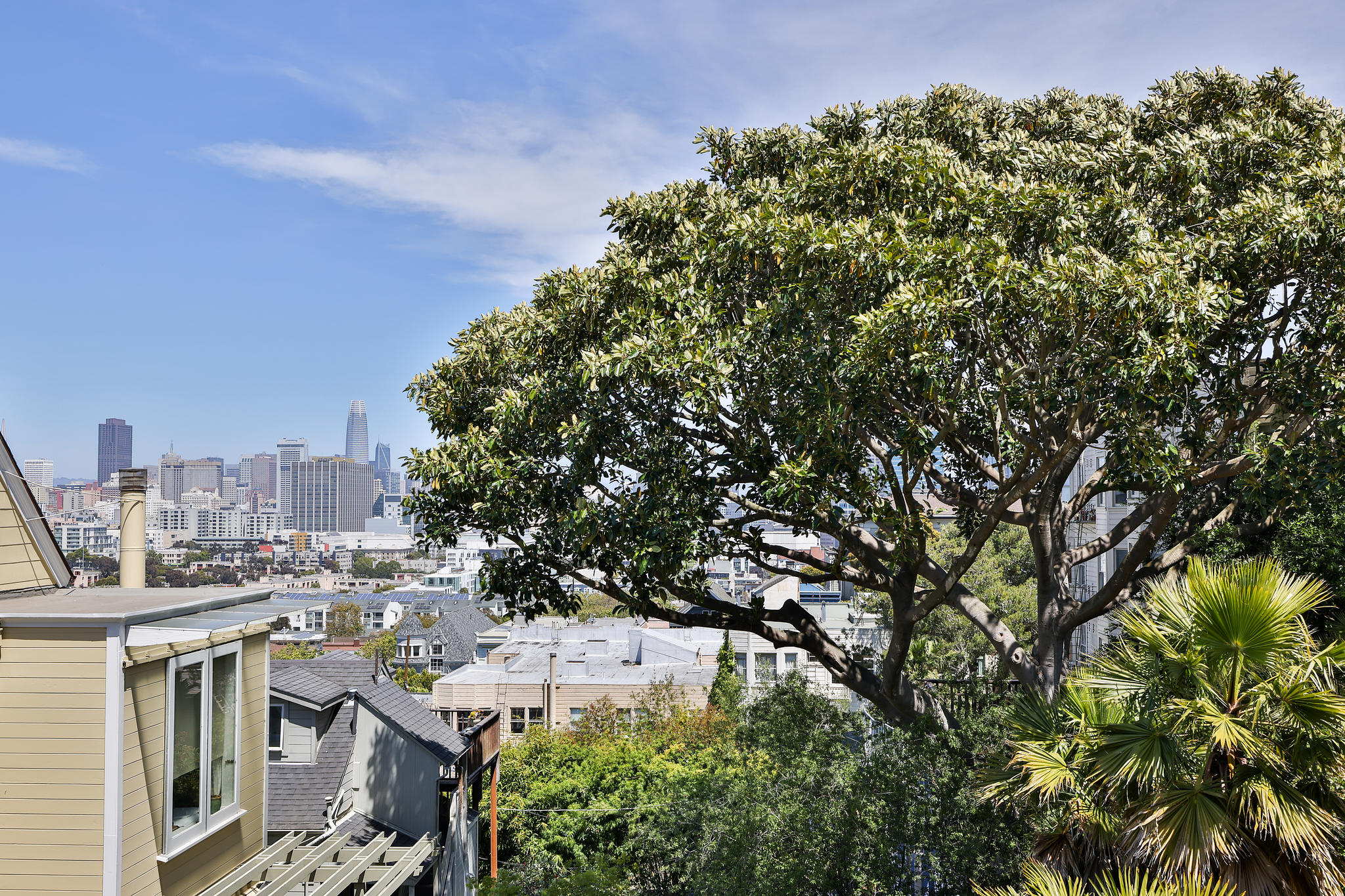 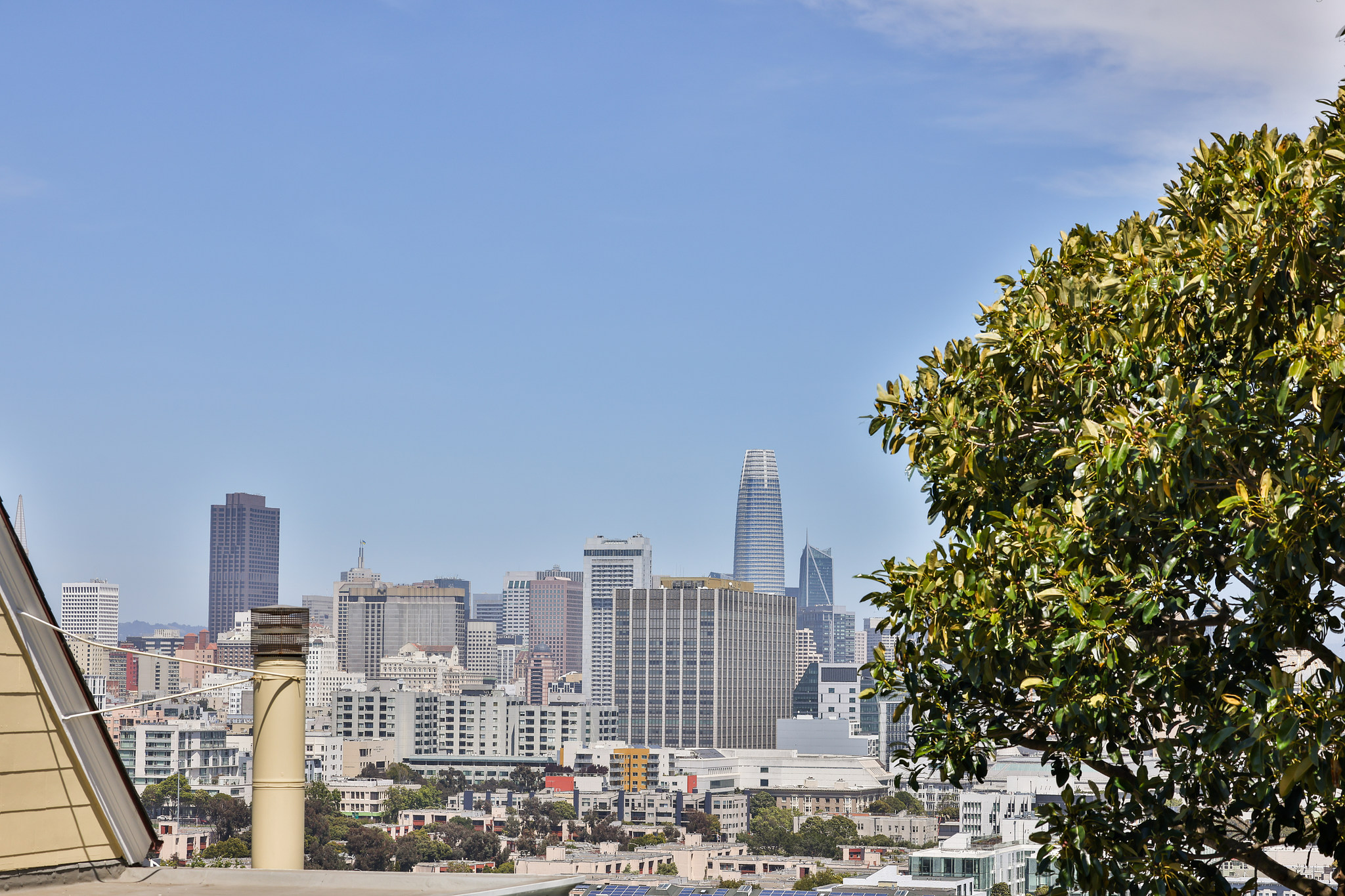 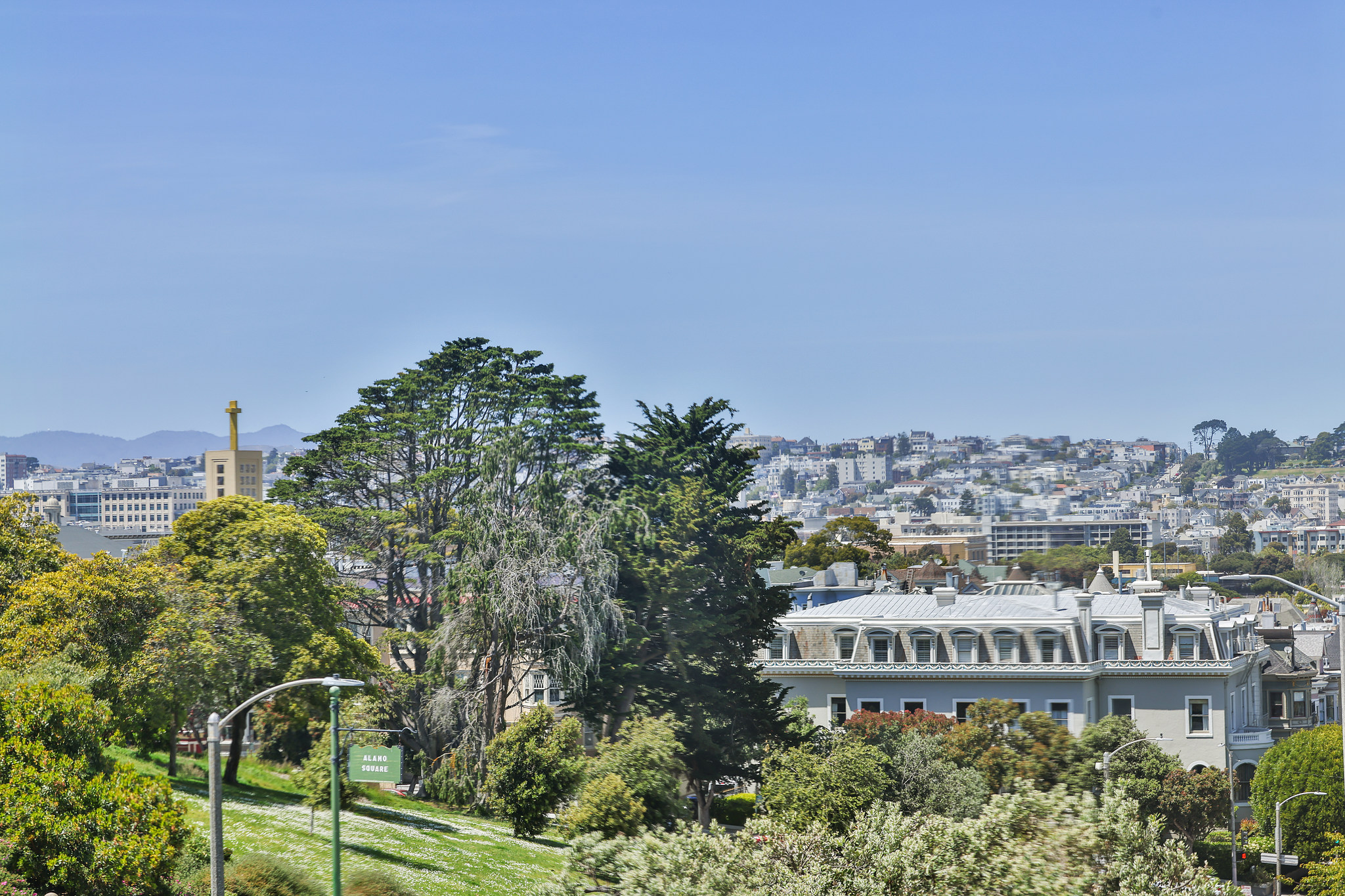